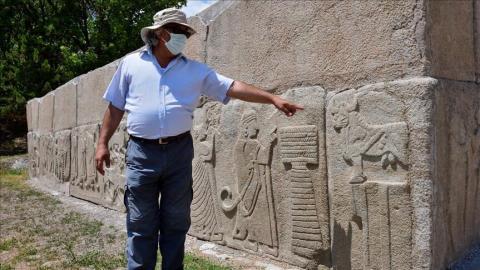 Works that have been carried out in the ancient site of Alacahöyük, one of the first archaeological excavations of the Republic era, aim to reveal the detailed cultural timeline of the 7,000-year-old city.

Excavations in the Central Anatolian province of Çorum's Alacahöyük village, which started in 1935 with the order of the founder of Turkish Republic, Mustafa Kemal Atatürk, and the contribution of his personal wealth, still continue.

The ancient site of Alacahöyük, located 53 kilometers away from the city center, is among the most important archaeological centers of Anatolia as it embraced different civilizations since the Chalcolithic Age.

Local and foreign researchers from different disciplines have so far worked in the excavations where important traces of the ancient Anatolian cultural history, as well as the Hatti and Hittite civilizations, have been unearthed.

Archaeological excavations stopped after the death of the previous head of the excavation, Professor Aykut Çınaroğlu, and resumed in 2020 under the chairmanship of Professor Tayfun Yıldırım, a lecturer at Ankara University's Department of Protohistory and Near East Archaeology.

Speaking to the state-run Anadolu Agency, Yıldırım said that they focused on two main goals this year in Alacahöyük.

"One of my main goals is to identify the details of the cultural timeline in Alacahöyük and to reveal the place of the city in the chronology of Central Anatolia in line with this new information. A chronology has been attempted to be made in this place since 1935, but this chronological system must compete and be in harmony with the chronology we have obtained in other Hittite cities or other mounds today. Therefore, we will conduct test drillings in some areas,"...