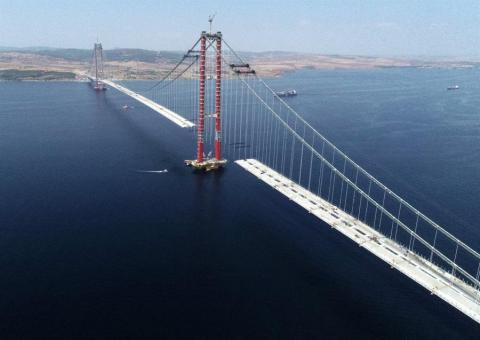 Officials have placed the 67th deck of all 87 decks of the Çanakkale Bridge, aiming to finish joining the bridge road that will connect the European and the Asian sides of the strait by the end of September.

The bridge, nicknamed "neckband of Çanakkale Strait," will be opened to public service on the 107th anniversary of the Çanakkale Victory on March 18, 2022.

According to the state-run Anadolu Agency reporters who witnessed the latest work on the bridge, some 5,000 workers, including 650 engineers, are working 24/7 to bring the bridge to service.

The 67th deck, which is 48 meters in length and 45 meters in width, was successfully placed on the bridge road on Sept. 15.

The length between the bridge's two legs at opposite sides is exactly 2,023 meters, referring to the 100th anniversary of the Turkish Republic in 2023.

"The bridge is colored in the colors of the Turkish flag: Red and white," the agency reported. Also, the top of the bridge's towers will look like cannonballs that the symbolic name of the Çanakkale Victory, Seyit Onbaşı (Corporal Seyit), had carried all through the Independence War.