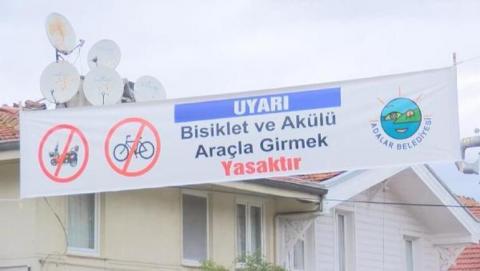 Local authorities in Istanbul have imposed a ban on battery electric vehicles on Princes' Islands, a cluster of nine islands in the Marmara Sea, in a bid to curb increasing accidents involving the vehicles and unauthorized parking at pedestrian-only venues.

The ban will come into force starting from Oct. 5 with exceptions for permanent residents who are below the age of 66.

The vehicles, mostly electric motorcycles and bicycles, are essential for islanders and visitors alike where the roads are not suitable for larger vehicles, especially for those traveling to higher ground.

The municipality banned horse-drawn carriages, which were mostly used by tourists, a few years ago and introduced electric carriages on the islands.

However, the residents of the Princes' Islands are divided over the decision, as some support the decision, while others strongly oppose it.

"They should definitely ban them," said Faika Ayça, a resident of Büyükada, claiming that the place has been "turned into a highway."

On the other hand, Özkan Atak, a battery vehicle rider, said no one has the right to take away his right to drive them.

"If they impound the vehicles on Oct. 5, there will be chaos," he noted.