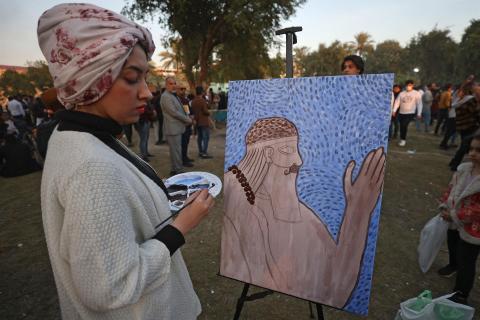 Art exhibitions, book fairs on the Tigris and Godot in Baghdad - after decades of conflict and strife, the Iraqi capital is experiencing an artistic renaissance.

"We are like any country, we have the right to art to entertain us."

But behind the conflict, tensions and recently the pandemic, a fledgling cultural renaissance has emerged in recent years, recalling a golden age when Baghdad was considered one of the Arab world's cultural capitals.

Galleries have opened and festivals have blossomed, attracting crowds eager to make up for lost time.

The Gallery opened its doors barely a month ago, but visitors queue around the corner on opening night of any show.

In a recent show, Iraqi-Canadian artist Riyadh Ghenea paid tribute to his late mother with a series of brightly coloured abstract compositions.

She "suffered all the phases that Iraq has been through," said the artist, who came back to Baghdad in 2011.

Upon his return, "I found neither my mother nor the country that I had left behind," he said.

The rise of the Islamic State militant group in 2014 saw more brutality and bloodshed.

Amir, a 25-year-old pharmacist, acknowledges that his entire childhood was accompanied by conflict.

"Art allows us to alleviate the stress of our daily lives," he told AFP from outside The Gallery.

Normality hangs by a thread in the Iraqi capital,...