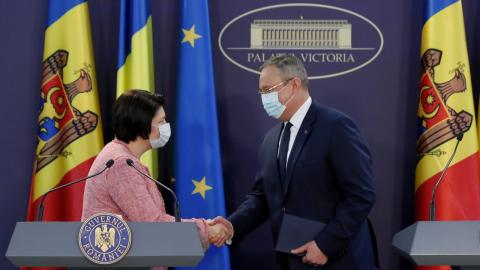 Romania's government on Wednesday approved a 100-million-euros financial support package for Moldova to help it deal with a looming energy crisis.

Romania's financial assistance comes at a difficult time for its neighbour, after Russian energy giant Gazprom warned it would stop supplying gas to Moldova if its Moldovagaz subsidiary does not pay outstanding debts within two days.

As Moldovagaz does not have the cash flow to cover this, Moldova's government will stage a financial intervention again to prevent a stop in gas deliveries.

Moldova's Prime Minister, Natalia Gavrilita, said she would ask parliament to introduce a state of emergency in the energy sector in order to unlock money fast from the state budget to cover Moldovagaz's debts to Gazprom.

Gazprom owns 64 per cent of Moldovagaz, making it a subsidiary of the Russian giant. Gavrilita on Wednesday said Gazprom had sent a letter to Moldovagaz, warning it will stop the supply of gas if it does not pay for the gas consumption for the first half of this month in full by January 20.

"In other words, we have an official letter stating that there is a real risk that gas supplies will be cut off," the Prime Minister said.

At the time of sending the letter, the amount demanded by Gazprom was about 63 million US dollars, of which Moldovagaz can cover only 38 million, so the Moldovan state will cover the other 25 million.

The PM stressed that Gazprom refused to postpone the repayments owed by its subsidiary in Moldova.

"I would remind you that in previous years, Gazprom allowed Moldovagaz to accumulate negative deviations [debts] during winter that were paid in the following months," she said.

She added that the government considered the risk to the...