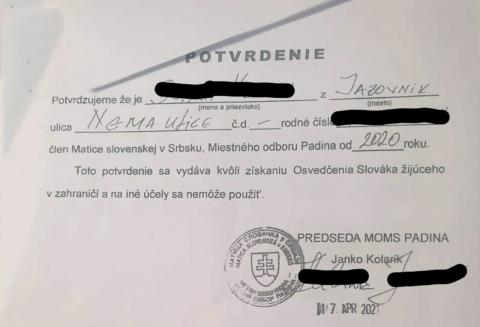 The organisation's local office in the Serbian town of Padina issued fake documents confirming applicants' bond to Slovakia, even though they had nothing to do with the country, the Sme daily reported. Thanks to the documents, they could have gained the status of a Slovak living abroad.

People with this status can obtain Slovak citizenship faster and it is easier for them to gain employment in Slovakia.

The local N1 television network reported on the fraud the past weekend, claiming that it had obtained official emails exchanged between Matica Slovenska in Serbia and the Office for Slovaks Living Abroad. Another Serbian network, TV Petrovec, along with the Storyteller website had reported on the case before.

The Office for Slovaks Living Abroad has stopped recognising the letters of confirmation issued by Matica Slovenska in Serbia for the first time in its history. Because the local branch refused to cooperate, the Office "has taken several measures and is acting in cooperation with other relevant institutions in Serbia and Slovakia." The Office declined to provide details.

Branislav Kulik, the head of Matica Slovenska in Serbia, told N1 they'd had doubts about the issued documents and contacted a prosecutor's office in Serbia and Slovakia to look into their suspicions.

When the letters were handed out to foreigners by the Padina office, it was Jan Kolarik who chaired Matica Slovenska at the Serbian local branch. He died in February 2022.