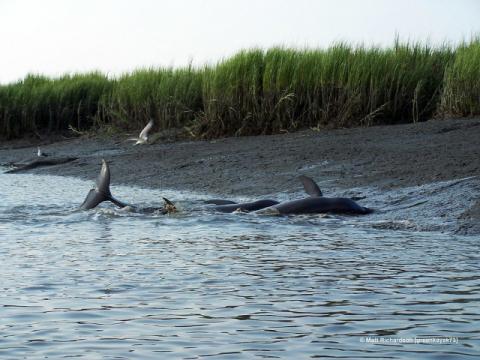 At least 3,000 dolphins have fallen victim to Russia's military operations against Ukraine in the northern part of the Black Sea. Prof. Ivan Rusev, head of the "Research" department at the National Natural Park "Tuzlovsky limani" in Ukraine, claims this in his post on Facebook. According to Rusev, the reason for the death of the dolphins is the powerful sonar of the warships, as well as the underwater explosions, which destroy the delicate navigation system of the animals.

Remaining practically "blind" dolphins die of hunger, and due to the weakness of their bodies, also of infectious diseases, says Rusev.

In answers to questions sent by "Dnevnik", he confirmed that since the beginning of the war until now it is believed that more than 100 dead dolphins were found from Odessa to the Danube Delta

"It should be borne in mind that it is only 2-3% of the Black Sea coast of Ukraine that can be explored", said Ivan Rusev. "The rest of the coastline is inaccessible for exploration due to martial law. In the past, along these 2 -3% of the coastline only a few dolphins, a year were found dead. If it were now possible to monitor the remaining 97% of the coast, the number of dead animals found would be much higher."

According to Rusev, the examinations of the discovered dead mammals along the coast of Ukraine, as well as Romania, Bulgaria and Turkey clearly show that directly or indirectly the reason for the death of the dolphins is precisely the war which Russia leads in the northern part of the Black Sea.

"On the dolphins that died because they fell into fishing nets, there are clear signs of this", explained Rusev. "The dead dolphins found before the war had their fins cut off, because fishermen or poachers...