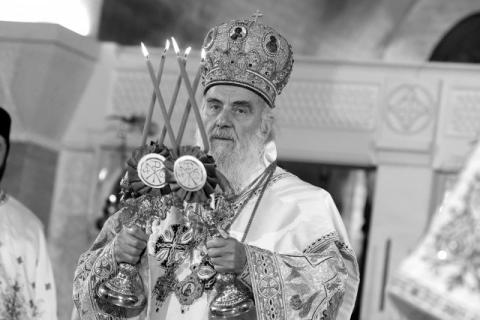 ﻿ The head of the Serbian Orthodox Church died this morning in the Karaburma Military Hospital as a result of the coronavirus, at the age of 91.
"At today's session, the Government of the Republic of Serbia made a decision to declare three-day mourning in the Republic of Serbia, from today, November 20, to Sunday, November 22, on the occasion of the death of His Holiness Serbian Patriarch Irinej," the government said in a statement.
During the day, state officials, politicians and public figures are sending condolences for the Patriarch's death. They described the late SPC head as the symbol of spiritual unity, the voice of sanity, reconciliation, forgiveness and the Christianity moral, perceiving his death "as irreparable loss".
Russian President Vladimir Putin sent his condolences to his Serbia's counterpart Aleksandar Vucic: "Dear President, accept my sincere condolences for the great loss, the death of His Holiness Serbian Patriarch Irinej", Sputnik quoted Putin as saying.
As he said, Irinej's "main efforts were the promotion of the highest spiritual values, but also the strengthening of the unity of the entire Orthodox world." "Please convey my condolences and words of support to the entire clergy of the Serbian Orthodox Church, as well as to the entire Serbian fraternal people," Putin concluded.
Bells are ringing at the Temple of Saint Sava, while the believers of the Serbian Orthodox Church light candles.﻿