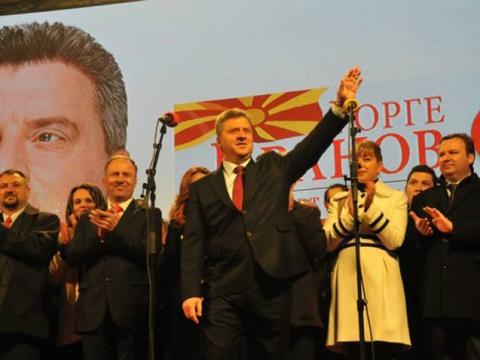 Preliminary results from Sunday’s presidential election in Macedonia suggest that Ivanov, who is running for a second five-year term for the ruling VMRO DPMNE party, is leading the count, ahead of his main rival, Stevo Pendarovski who is running for the opposition Social Democrats.

The State Electoral Commission, said that 95 per cent of the votes have been counted so  far.

Ivanov leads over Pendarovski in almost all Macedonian towns and in the capital Skopje.

At a press conference this evening, VMRO DPMNE declared victory of their candidate in the first round.

“VMRO DPMNE and Gjorge Ivanov had won. These numbers guarantee a much more decisive victory than our previous prediction... We are counting on even greater support in the second round [in two weeks]” said Vlatko Gjorvev of the ruling party.

Ivanov addressed the public insisting that the elections were peaceful fair and democratic.

“Today the citizens opted for our concept of permanent reforms... of honesty and patriotism”, Ivanov said noting that general elections will take place alongside the second round of the presidential poll.

“This gives us strenght for achieving our ultimate goal in the second round - wining 62 seats [in the 123] parliament,” Gruevski said.

At a press conference the Social Democrats accused of foul play.

“Under these conditions of constant blackmails and pressures”, Pendarovski said that his result may be considered a “bravery” on the part of the...