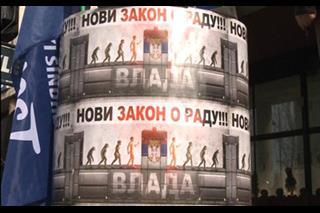 BELGRADE - The proposed amendments to the labour law announced by Labour Minister Aleksandar Vulin are unacceptable to the Confederation of Autonomous Trade Unions of Serbia (SSSS), SSSS President Ljubisav Orbovic has said.

The impression that the amendments have mostly been agreed on is also incorrect, since the trade unions have definitely not agreed to the changes in the law that refer to pays, the proposal for the severance pay to only cover the years of employment at the most recent employer and the payments of two rather than three average salaries upon retirement, Orbovic told a news conference on Wednesday.

A compromise is unlikely and the unions will have to resort to other tools at their disposal if the amendments are not changed back to what was agreed with Prime Minister Aleksandar Vucic.

The Employers' Association, not the unions, asked for the extended application of the collective agreements to be included in the labour law back in 2008, and now they want that provision revoked under pressure from the IMF and World Bank, which is not in the employers' interest, he stated.

It is also very unpleasant that the labour law will not be put up for a public debate, he noted.

General Secretary of the United Trade Unions Independence Zlata Zec says that some amendments to the labour have not been agreed with the unions.

"We hear in the media that we have agreed, which is not true. The unions did not even allow the chapter on pays and reduction of union rights to be started,"...