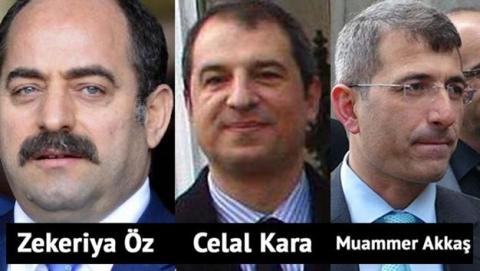 Four prosecutors that led initial graft probes against the government a year ago have been suspended, even though the cases were ultimately thrown out.

Turkey's highest judicial board has suspended four prosecutors who were all involved in now-dropped graft investigations last December pending the outcome of an ongoing investigation.

Ruling that their remaining in office would "harm the clout and reputation of judicial power," the 2nd Chamber of the Supreme Judges and Prosecutors Board (HSYK) decided to suspend Zekeriya Öz, Celal Kara, Muammer Akkaş and Mehmet Yüzgeç Dec. 30.

In May, the 3rd Chamber of the HSYK gave the green light for the prosecution of Öz, Kara, Akkaş and Yüzgeç. Subsequently, the decision to open an investigation obtained the final approval of Justice Minister Bekir Bozdağ. At the time, the third chamber also asked for the suspension of the four from their duties pending the outcome of the investigation.

Upon the completion of the investigation, a decision will be made on whether the prosecutors will be dismissed from their profession.

Speaking to reporters following the release of the decision, the head of the second chamber, Mehmet Yılmaz, said the five members of the chamber voted in favor of suspension, while two members objected.

Yılmaz recalled that Article 77 of the Law on the HSYK stipulates that the board may suspend a judge or prosecutor, who is being investigated, as "a temporary caution," if it maintains that the continuation of his or her presence in office would harm the clout and reputation of judicial power. In this case, the investigation has been completed, meaning the soundness of the investigation is not in question, but there is still "harm to the clout and reputation of judicial power," Yılmaz said.