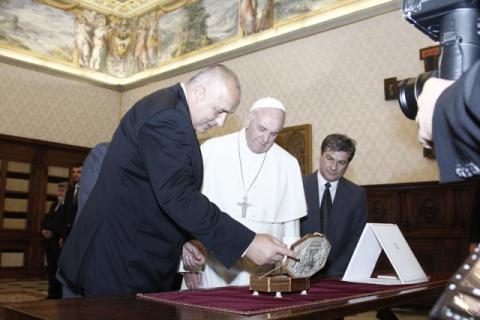 Bulgarian Prime Minister Boyko Borisov and a delegation headed by him were received at an audience by Pope Francis in the Vatican on Saturday.

The delegation is visiting the Vatican and Rome on Saturday and Sunday, on the occasion of May 24, when the Day of Bulgarian Education and Culture and Slavonic Script is celebrated.

The audience is traditional and it recognises the role played by Bulgaria in preserving and furthering the deeds of Saints Cyril and Methodius, who were declared as co-patron saints of Europe by the Holy See.

Borisov had a private conversation with Pope Francis in the Apostolic Palace in the Vatican, the government's press service informs.

The Bulgarian PM noted that the government recognised with deep respect the right of people to worship their religion, always supported the recognised denominations and relied on their responsible attitude towards causes, which were of significance for the society.

Borisov presented to Pope Francis a gift of high spiritual value - a silver reliquary containing a stone from the resting place of Saint John of Rila.

The Bulgarian PM also met with the Vatican's Secretary of State Cardinal Pietro Parolin, to whom he gifted two candlesticks, which are placed on the altar during service.