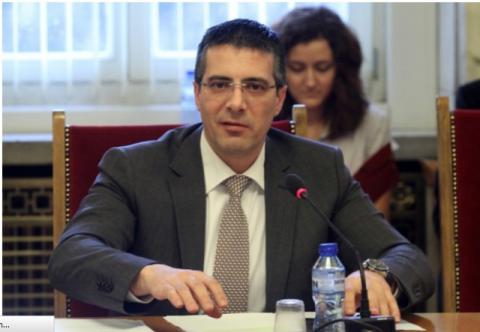 Svetlin Tanchev, one of the "renegade" MPs, was previously a key member of Nikolay Barekov's Bulgaria without Censorship party. Photo by BGNES

Five Bulgarian lawmakers from the Bulgarian Democratic Center (BDC)'s parliamentary group are to submit their requests to leave it, one of the MPs has said.

BDC was set up by lawmakers who were previously part of a coalition led by MEP Nikolay Barekov and made it into Parliament within an alliance led by his Bulgaria without Censorship party.

However, most of lawmakers belonging to Barekov's party quit, some of them pledging loyalty to Lider, a party widely thought to be run by businessman Hristo Kovachki which later renamed itself to Bulgarian Democratic Center.

Thus its name coincided with that of the main party within the parliamentary group. In time Barekov's Bulgaria Without Censorship was stripped by all but one of its MPs.

Now Svetlin Tanchev, one of the lawmakers willing to quit the BDC group (who is not part of the BDC party) argues the five want to avoid being linked with "the name of Kovachki's party".

In his words, they are disputing with the BDC group over the possibility of including the name of Tanchev's newly set up party, "People's Union", as part of that of the BDC group to distance themselves from the dominating party.

If the five lawmakers fail to smooth out differences and leave, the BDC group will have to dissolve itself since it will have less than the 10 MPs needed to be set up (it currently has 14).