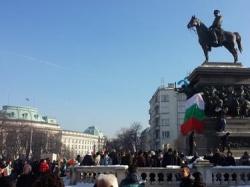 Three people were detained yesterday because they smoked marijuana in front of the National Assembly, FOCUS reported.

The event organised on social media, which gathered many people before parliament, was a protest against the criminalization of marijuana use.

Exactly at 16:20 in the afternoon, dozens of young people sparked demonstration of cigarettes forbidden despite the risk of being arrested.

And shortly after the start of the event, three were detained.

The main demands of young people are the decriminalization of the possession of small quantities of grass for personal purposes, as well as the possibility of growing up to two plants for personal needs.