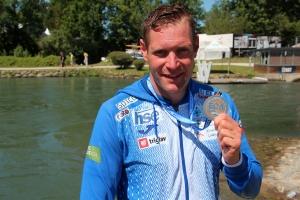 Putting in an almost perfect final run, Savšek beat the home favourite Martin Thomas by 79 hundredths of a second. German Sideris Tasiadis trailed more than two seconds behind in third.

This is the second European champion title for the 32-year old Slovenian canoeist after he secured gold at the championship in Markkleeberg in 2015.

This is the third medal for Slovenia at the European Canoe Slalom Championships in Pau, after Savšek, Anže Berčič and Luka Božič won the men's team canoe event and Peter Kauzer, Martin Srabotnik and Niko Testen grabbed silver in the men's kayak team event yesterday.

Ban on overtaking for lorries on A1 motorway enters into force

Government approves release of funds for the STA