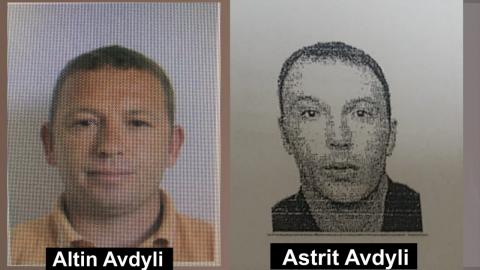 The Avdyli brothers shown in an archive photo collage.

The prosecution said it had opened an investigation into a breach of state secrets. The government has not yet commented on the case.

Earlier on Wednesday, the German tabloid BILD published six eavesdropped phone conversations from a file known in the media by its number, 339, apparently leaked from the Albanian prosecution.

In the conversations, Astrit Avdylaj, a notorious underworld figure from Shijak in central Albania, and who was arrested on October 2018 on drug trafficking charges, is heard discussing the forthcoming elections with two Socialist Party mayors and several other Socialist officials.

Two of the conversations suggest that Avdylaj proposed to organise support to get Ilir Ndraxhi elected as a Socialist MP for the Durres area. [Link to report]

According to the conversation, Avdylaj had pushed several key figures from the party in Durres region to get Ndraxhi on the Socialist list, promising to work hard to obtain a good election result for him. Ndraxhi was placed fourth on the party list for Durres and duly became an MP.

In another conversation, Avdylaj is heard ordering the director of the Durres water utility company to provide him with a list of its employees and annotation of who among them might be supporters of the opposition. The purpose of the list, according to Avdylaj, was "to shake them a bit".

"They will give me their votes or they will go home," i.e. be sacked, Avdulaj is heard saying, while the director assures him: "The list is ready."

After the publication of the tapes, Lulzim Basha, head of the Democratic Party, said: "The country needs a political solution that includes the dismissal of the illegitimate Prime Minister Edi Rama."...