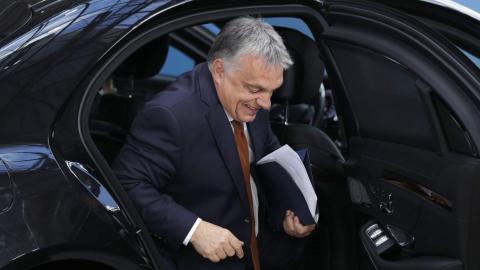 Fidesz, meanwhile, has rowed back on threats to join a rival political family after right-wing nationalist parties failed to win enough EU parliamentary seats to upset the balance of power in an increasingly fragmented European Union.

That leaves the issue of Fidesz's EPP membership on the back burner, at least until national leaders finish wrangling over who gets to run Europe's main institutions, the vexed subject of an EU summit this week.

The EPP suspended the party of Hungarian Prime Minister Viktor Orban back in March over allegations it had defied EU norms on upholding the rule of law.

The decision stripped Fidesz of voting rights along with the right to attend EPP meetings or propose candidates for party positions, but it stopped short of outright expulsion.

That leaves Fidesz in a kind of half-way house. The question now is whether the EPP will finally show Fidesz the door or find some kind of accommodation with a party accused of undermining democracy in an EU nation.

As for Orban, the pioneer of "illiberal democracy" has chosen his words carefully in recent radio interviews, underlining his intention to remain in the political grouping — so long as the EPP "moves in a good direction".

That means maintaining its allegiance to Christian values and adopting a stronger position on migration, he said.

Members of Orban's cabinet have been more conciliatory.

Gergely Gulyas, head of the prime minister's office, told German daily Die Welt in a recent interview that "it is better for Fidesz to remain inside the EPP and it is also better for the EPP to...