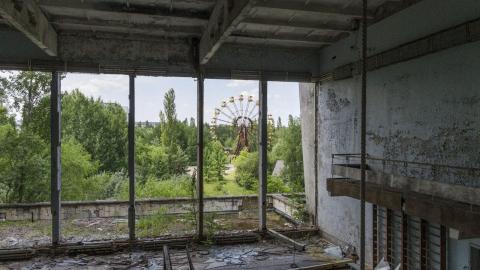 "I would describe my trip to the zone as a once-in-a-lifetime experience," said Pavel Shumejko from North Macedonia. "I learned a lot about the zone and the accident and got to visit a lot of iconic places, starting from abandoned ruined villages, schools and hospitals to the ghost town of Pripyat."

But he warned off "casual tourists that have no knowledge of the Exclusion Zone or the accident and are looking for a theme park ride."

"We should respect the sacrifice and bravery of the people who put themselves in danger in order to prevent the disaster from spreading," he said.

Shumejko, who now lives in Estonia, visited Chernobyl in May with two friends, also from North Macedonia.

He first became interested in Chernobyl through computer games such as STALKER and COD4 and took the tour before the HOB series hit screens.

"Moving through the city of Pripyat, at some points I felt that I was in a forest even though there were 10-15 story buildings on an only few meters away," he said.

In May, Reuters reported that Ukrainian agencies that organise visits to Chernobyl had seen a 30-40 per cent increase in tourists in May 2019 compared to the previous May.

According to Forbes, since the show's debut, Intrepid Travel, the world's largest adventure travel company, has reported a 131 per cent increase in bookings of its 13-day Moldova, Ukraine, and Romania Explorer trip, which includes a stop in Chernobyl.

Even in the Ukrainian capital, tourists can sign up for a new tour of the "shooting...

Nearly Half of Bulgarians Give Preference to Authoritarian Leader