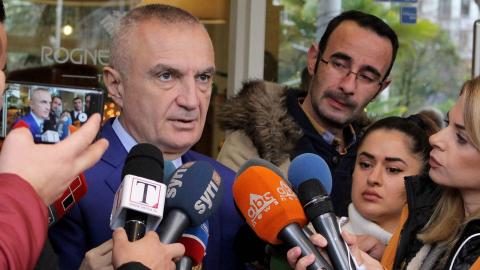 The new laws "could place the Albania on the brink of authoritarianism and endanger its [EU] integration and the very existence of democracy in the country," Meta wrote in the explanatory note accompanying his decree.

The President complained that the laws, "through punishing mechanisms aim to put media outlets under political control, especially the electronic media, which constitutes a gross violation of the freedom of expression".

Much criticized by local and international rights organizations, the laws would create an administrative body that has the power to order online media to retract news stories that it says violate the rights of dignity and privacy. It would also have the power to order media to publish "corrections" in the form of obligatory pop-up windows and to fine media if they disobey its orders.

Socialist Prime Minister Edi Rama, who has proposed several similar initiatives in the past, claims the online media needs "disciplining" and that the laws are "fully compatible with international standards".

Following Meta's decree, the parliament, which is controlled by Socialist Party, can either accept decree and start over the process of the law, or dismiss it with a simple majority. Under the constitution, the President can reject laws approved by parliament only once.