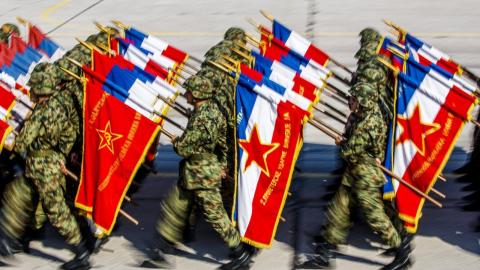 "The overall economic and legitimacy crisis after Tito's death in the 1980s created a favourable atmosphere for criticising the Partisan myth and creating positive images about their [the Partisans'] enemies [the Chetniks]," Djureinovic, who has a PhD in history from Justus Liebig University in Giessen and works with the Belgrade-based Humanitarian Law Centre, told BIRN in an interview.

In this environment, Djureinovic argued, Serbs were increasingly depicted as victims - "not only of communism, but also as a nation which did not profit from life in socialist Yugoslavia".

At the same time, authors started publishing books depicting the Chetniks as anti-fascists while justifying their collaboration with the occupying Nazi forces during WWII as an attempt to protect the Serbian people from their occupiers.

Chetniks and Partisans briefly fought alongside each other at the outset of WWII in Yugoslavia, but split within months. The Chetniks then started collaborating with Nazi Germany, arguing they were only doing so to protect the Serbian people.

The Chetnik movement, led by General Dragoljub 'Draza' Mihailovic, committed large-scale crimes and other atrocities during the war. Mihailovic was prosecuted for high treason and collaboration with Nazi Germany by a Yugoslav court after the war ended, and sentenced to death.

The glorification of the Chetniks and the denial of their wartime crimes is also connected to the dissolution of Yugoslavia at the beginning of the 1990s, Djureinovic said.

Some political parties embraced the Chetnik ideology, like the Serbian Renewal Movement and later the ultranationalist Serbian Radical Party, led by Vojislav Seselj.

Seselj described himself as a Chetnik 'duke' and argued that the tradition of...