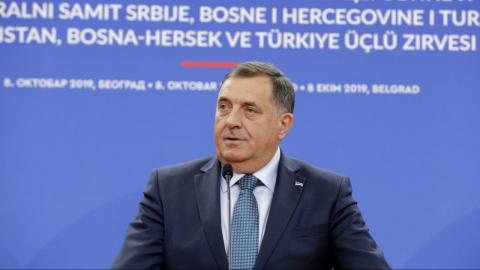 Things were beginning to look pleasantly boring in Bosnia after the recent formation of the central government in December, after which many political analysts and Bosnian citizens breathed a sigh of relief. But the respite from crisis was sadly short-lived in Bosnia.

Yet a recent ruling by the Bosnian Constitutional Court to strike down an RS law on agriculture elicited an extremely angry reaction from Milorad Dodik, the Bosnian Serb member of the Bosnian Presidency, who led members of all RS parties into a boycott of decision making in state institutions. Dodik, supported by HDZ leader Dragan Covic, is demanding legal changes regarding the work of the Constitutional Court, as well as new election legislation in line with Covic's demands. The grandstanding is a tried and tested pre-election trick in Bosnia politics. Yet there is a lot more to the current crisis than just that, and even more at stake.

Constitutional Court of Bosnia and Herzegovina Photo courtsey of N1

Surprising as it may seem, the idea of ignoring or challenging Constitutional Court rulings is hardly unprecedented in Bosnia. On the contrary, authorities and politicians in Bosnia have somewhat of a tradition of doing so.

Until three years ago, the number of unenforced rulings by the Court stood at more than 80. The latest tally places the number at 15, with the oldest unimplemented ruling being from 2015. Yet many of those supposedly enforced rulings are in fact only enforced on paper. Worse still, the willingness to defy the Court' rulings demonstrates that many Bosnian politicians and officials feel that they can do so with...