CHP leader says ‘no one should be left jobless’ during outbreak 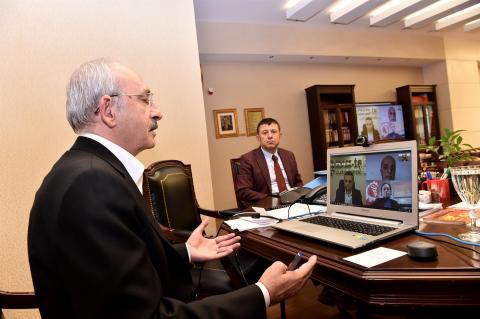 Main opposition Republican People's Party (CHP) leader Kemal Kılıçdaroğlu has congratulated three labor confederations for signing a joint declaration and said no one should be left without jobs during the novel coronavirus outbreak.

Türk-İş, Hak-İş, and DİSK signed a joint declaration on March 31, aiming to protect workers' rights and jobs to avoid the economic consequences of the COVID-19 pandemic.

The confederations listed three demands for the government to consider, including a ban on dismissal, suspending all works for at least 14 days -except urgent service production, and the activation of the Unemployment Insurance Fund to compensate for the income loss.

CHP leader Kılıçdaroğlu on April 2 held a meeting with the confederations' chairs and deputy chairs via a video conference and said their solidarity is "valuable for democracy and Turkey."

"Dismissal needs to be restricted in some way. No one should be left without jobs or food during this period. In this sense, we are providing all kinds of support to you. Unfortunately, some of the unemployed are uninsured and some are insured," he said.

"But during these times, everyone needs a safe income, without any discrimination between insured and uninsured. Regarding this, the unemployment insurance fund should be set in motion," he added.

Kılıçdaroğlu also said that the CHP has called on the government to "make a common mind sovereign" and convene the Economic Social Council, which is a constitutional institution that has not convened since Feb. 5, 2009.

"Because the problem-solvers need to get together with those having problems. They should tell about their problems so others can find a solution. This did not happen, but I hope it will," he said.