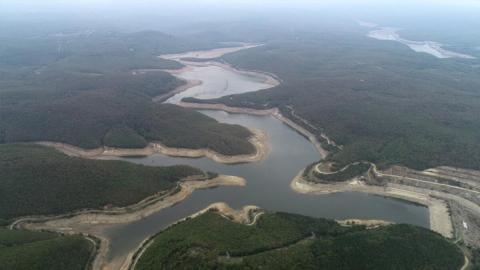 The residents of Istanbul, Turkey's largest city by population, have ramped up their water use in the wake of the deadly coronavirus outbreak, but the water levels in the mega city's dams are falling.

Data from the city's water authority show that the water use in the city has been steadily increasing since early March but the authority noticed that the water use peaked after the curfews were starting to be imposed, calling on the residents to be more cautious about water consumption.

The Istanbul Water and Sewerage Administration (İSKİ) has reported that the water usage in the mega city, which is home to around 16 million people, has risen by 4.5 percent since the start of March.

The water use in the city increased particularly after weekend lockdowns were introduced. Also, because people chose to self-isolate themselves at homes, it caused more water use.

Health officials are calling on people to heed sanitations rules more than ever, wash their hands, products they buy from supermarkets to avoid contact with the coronavirus. Apparently, the residents of Istanbul are adhering to those advises which result in more water consumption.

Istanbul accounts for nearly 60 percent of all confirmed coronavirus cases in the country.

Even though officials from İSKİ assure that the city has enough water, it is still urging people not to waste it.

However, on the downside, as consumption rises, the dams of the city have less water this year compared with 2019.

Data show that the water level in Istanbul's dams dropped to 68.5 percent as of May 4...