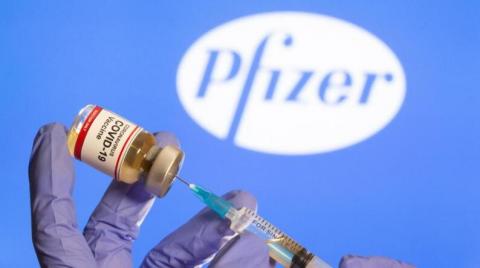 Britain on Dec. 2 became the first country to approve Pfizer-BioNTech's COVID-19 vaccine for general use and said it would be introduced next week.

"The government has today accepted the recommendation from the independent Medicines and Healthcare products Regulatory Agency (MHRA) to approve Pfizer-BioNTech's COVID-19 vaccine for use," the department of health said in a statement.

"The vaccine will be made available across the UK from next week," the statement said, with priority groups including care home residents, health and care staff.

Meanwhile, the EU drug agency said on Dec. 1 it may need another four weeks to decide whether to grant its first approval for a coronavirus vaccine, even as authorities in the United States and Britain continued to aim for a green light before Christmas.

The European Medicines Agency plans to convene a meeting by Dec. 29 to decide if there is enough safety and efficacy data about the vaccine developed by Pfizer and BioNTech for it to be approved, the regulator said. The agency also said it could decide as early as Jan. 12 whether to approve a rival shot by American pharmaceutical company Moderna Inc, which was submitted to U.S. and European regulators this week.

If its vaccine is approved, Germany-based BioNTech said its use in Europe could begin before the end of 2020, but that seems quite ambitious, given that the EU Commission usually needs to rubber-stamp the regulator's decision. Still, the regulator has also left open the possibility that the date of that meeting will be brought forward if data comes in faster.

The approval date now being eyed would be later than some European countries had hoped. Germany, which has given BioNTech 375 million euros ($450 million) in funding...