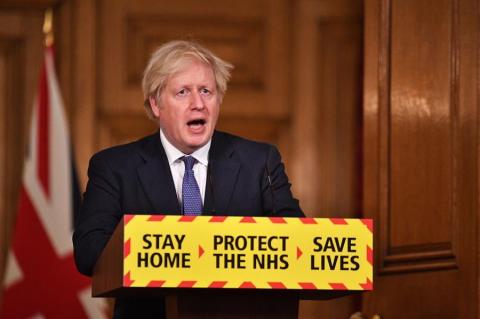 British Prime Minister Boris Johnson on Jan. 15 said that all arrivals to the U.K. will have to quarantine and show negative virus tests from next week as hospitalizations and deaths continued to soar but new cases fell.

The measures which enter into force early on Monday come after Britain banned all arrivals from South America and Portugal on Friday over fears of importing a new coronavirus variant from Brazil.

"This means that if you come to this country you must have proof of a negative Covid virus test that you have taken in the 72 hours before leaving," the prime minister said flanked by top medical and scientific officials.

"Upon arrival you must then quarantine for 10 days not leaving your home for any reason at all," he added, though travelers can take another test after 5 days to get out earlier.

The U.K. had previously made an exception for travelers from certain countries and territories with low numbers of cases allowing them to arrive freely through "corridors", without showing negative virus tests or quarantining afterwards.

These included Australia, New Zealand, Thailand and Singapore as well as Bermuda and Gibraltar.

Transport Secretary Grant Shapps tweeted that the stricter rules are because it is "impossible" for the government's Joint Biosecurity Centre to "provide live scientific updates to predict which countries or regions will now originate new variants."

The U.K. has been slow to require arriving travelers show virus tests, unlike many other countries, focusing instead on travellers from countries with high virus rates quarantining after arrival.

A week ago, it announced that travelers heading to England and Scotland would have to show negative tests pre-departure, while the...