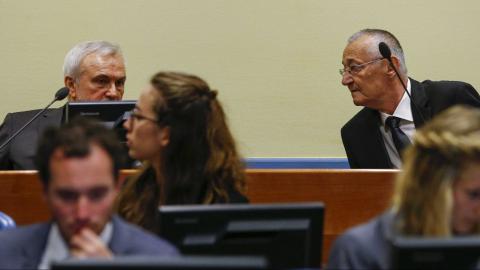 The third and final day of closing arguments in the retrial of former Serbian State Security officials Jovica Stanisic and Franko 'Frenki' Simatovic at the International Residual Mechanism for Criminal Tribunals in The Hague on Wednesday saw disputes between prosecution and defence over incidents from the 1990s.

Stanisic, the former head of Serbian State Security, and Simatovic, his former deputy, are being retried for alleged participation in a joint criminal enterprise along with Slobodan Milosevic and others, whose aim was the forcible and permanent removal of the majority of non-Serbs, mainly Croats and Bosniaks, from large areas of Croatia and Bosnia and Herzegovina in the period from 1991 to 1995.

Stanisic and Simatovic are accused of establishing, controlling, financing and deploying paramilitary units that committed crimes in Croatia and Bosnia and Herzegovina.

Defence lawyers claimed on Tuesday that a speech made by Simatovic in Kula in Croatia in May 1997 to celebrate the anniversary of the founding of State Security's Special Operations Unit, in which Simatovic spoke about the battles the unit had been involved in and the weapons it used, was "exaggerated" in order to impress Milosevic, who was present.

But prosecutor Douglas Stringer said that Stanisic had green-lighted the speech by his subordinate Simatovic.

"Not only did Stanisic necessarily approve Simatovic's speech, as he was duty-bound to do, but when he later awarded and applauded his unit, Milosevic had already left the room. This belies any claim that the ceremony was just a show for Milosevic," Stringer told the court.

But Stanisic's lawyer Wayne Jordash responded by insisting that "it's obvious that the Kula award speech does not contain the truth"....