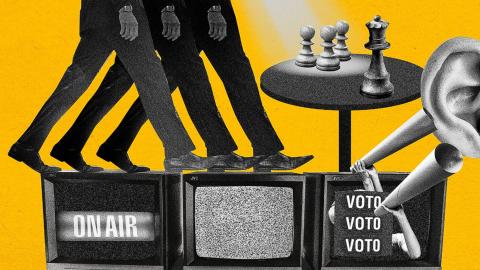 The AMA recommended sanctions against several outlets, but the Commissioner decided to fine only RTSH for breaking the 'electoral silence' on the eve of the vote.

Experts were incredulous, while one AMA board member, Sami Neza, said he was "astonished".

"We have proposed more administrative sanctions, but they have not been taken into account," Neza said.

"The media have not been balanced in their coverage during the campaign. This sanction will only burden the taxpayers."

According to Albania's electoral code, broadcasters are required to provide balanced, pluralistic and impartial coverage during the election campaign, adhering to standards of professional journalism and avoiding the use of hate speech.

The code stipulates that broadcasters should allocate equal airtime to Albania's two biggest parties and that together these parties should not receive more than twice the airtime of smaller political parties.

Yet according to data collected by AMA from 22 television stations and analysed by BIRN, 41.2 per cent of news coverage was devoted to the ruling Socialists, 32.9 per cent to the opposition Democratic Party and 15.4 per cent to the government, led by Socialist leader Edi Rama, and the president. The Socialists won, with Rama clinching a third successive term as prime minister.

The Socialist Party dominance is even greater if one looks only at Albania's three big private national broadcasters, TV Klan, Top Channel TV and Vizion Plus, which account for the lion's share of the audience in...