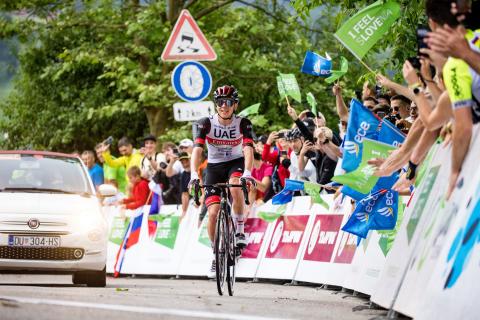 Celje – Slovenian cycling superstar Tadej Pogačar (UAE Team Emirates) won the second stage of the Tour of Slovenia between Žalec and Celje on Thursday. At the conclusion of the 147-kilometre stage, he was the best rider so far in the climb to Celje Castle to finish almost a minute and a half ahead of the competition.

With the stage win, the 22-year-old reigning Tour de France champion also took over the green jersey of the overall leader in the race around his native country.

With Pogačar clicking on all cylinders, the question was only who will take the second place, which went to Slovenia’s Matej Mohorič (Bahrain Victorious), who beat Italy’s Diego Ulissi (UAE Team Emirates) in the sprint at the finish line.

The shortest of the five stages in the 27th Tour of Slovenia started in Žalec, and took the competitors through Velenje, Mozirje and Vransko and back to Žalec, before taking a turn to Celje for the first time.

On Friday, riders will hit a diverse third stage from Brežice to Krško with three categorised climbs (Drensko Rebro, Studenec and Sremič).