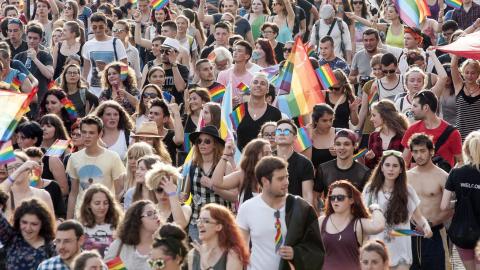 The event is taking place after several cases of homophobic assaults in Sofia, Plovdiv and Burgas, which many activists blame on hardened far-right rhetoric ahead of the July 11 general elections.

"There will be a bigger police presence in comparison to previous editions. We have the forces' assurance that no conflicts will be allowed," Simeon Vassilev, one of the most vocal activists in Bulgaria as well as co-founder of GLAS Foundation, told BIRN. GLAS earlier in June reopened Rainbow Hub as a safe space for the local LGBT community.

Several "contra-protests" are expected in the centre of Sofia, gathering those who see the event as a threat to traditional family values, Christianity and Bulgaria's identity.

"For the first time ever the police require us to build metal borders around the live music area," Vassilev noted.

On June 9, the "Single Step" foundation, which focuses on different initiatives to support the LGBT community, called for more support from the parties on the issues of legal protection and preventing discrimination. This comes as many demand clearer positions from parties that position themselves as liberal and pro-EU.

Apart from the criticism of nationalists parties, currently all out of the parliament, the topic has drawn almost complete silence from all other political entities.