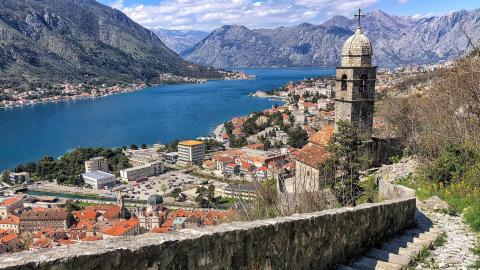 View on the Boka Bay from the Old Town of Kotor medieval walls. Photo: BIRN/Samir Kajosevic

"In a public place that is a part of the regional Kotor-Trojica road, they behaved shamelessly, stripped naked and posed on the road, taking pictures and photographs for ten minutes," Ivana Vuksanovic, judge of the Misdemeanors Court in Kotor, said.

Kotor Fire Department Service commander Maksim Mandic said their vehicle was engaged on Friday for the International Mountain Kotor to Trojica Car Race, which will be held on July 10. He said the fire engine was handed over to the organisers of the race in order to wash the road.

"Our firefighters did not participate in the washing but the organisers. So, our service, apart from the transfer of washing vehicles, had nothing to do with this event," Mandic said.

Media reported that last week that the three naked girls were shooting pornographic content in the Old Town of Kotor, which enjoys UNESCO World Heritage status. The municipality has not commented on the event so far.

On Friday Ukraine's consul in Montenegro, Mykhailo Shmatov, played down the incident. "No day without news in an active tourist season. Three Ukrainian girls were fined in Montenegro for an open public photoshoot. I am waiting for a note from the Foreign Ministry of Montenegro with video and photographic evidence of the incident," he posted n Facebook.

On April 8, media reported that 11 Ukrainian women were detained in Dubai and accused of public debauchery over an outdoor nude photoshoot.