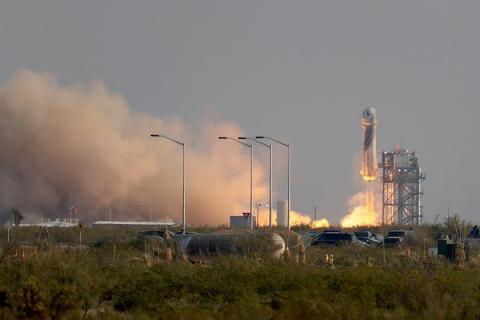 Jeff Bezos blasted into space on July 20 on his rocket company's first flight with people on board, becoming the second billionaire in just over a week to ride his own spacecraft.

The Amazon founder was accompanied by a hand-picked group: his brother, an 18-year-old from the Netherlands and an 82-year-old aviation pioneer from Texas - the youngest and oldest to ever fly in space.

"Best day ever," Bezos said after the capsule touched down on the desert floor at the end of the 10-minute flight.
Named after America's first astronaut, Blue Origin's New Shepard rocket soared from remote West Texas on the 52nd anniversary of the Apollo 11 moon landing, a date chosen by Bezos for its historical significance. He held fast to it, even as Virgin Galactic's Richard Branson pushed up his own flight from New Mexico in the race for space tourist dollars and beat him to space by nine days.

Unlike Branson's piloted rocket plane, Bezos' capsule was completely automated and required no official staff on board for the up-and-down flight.

Blue Origin reached an altitude of about 66 miles (106 kilometers), more than 10 miles (16 kilometers) higher than Branson's July 11 ride. The 60-foot (18-meter) booster accelerated to Mach 3 or three times the speed of sound to get the capsule high enough, before separating and landing upright.

The passengers had several minutes of weightlessness to float around the spacious white capsule. The window-filled capsule landed under parachutes, with Bezos and his guests briefly experiencing nearly six times the force of gravity, or 6 G's, on the way back.

Sharing Bezos' dream-come-true adventure was Wally Funk, from the Dallas area, one of 13 female pilots who went through the same tests as NASA's all-male...

Europe is financing Putin's War in Ukraine at 200,000 Euros a Minute

Biden asked Congress for $33 billion in Aid to Kyiv, NATO thinks the War in Ukraine could last for Years