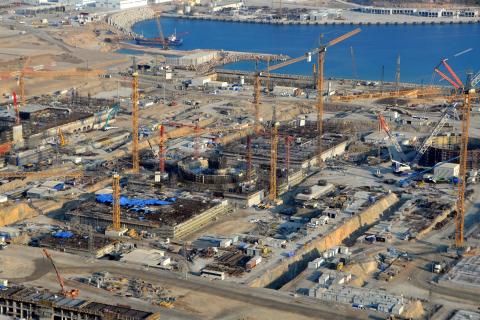 The first unit of Turkey's first nuclear power plant will be taken online in 2023 in accordance with the initial planning, Dmitriy Romanets, the deputy director of construction works at the Akkuyu Nuclear Power Plant (NPP), told Demirören News Agency.

"Assembling works are continuing in three units of the project. The works are continuing uninterruptedly in the first unit, which will be taken online soon. If all permits are granted, we are aiming to lay the foundation of the fourth unit at the end of the year," he said.

"We will complete assembly of all the equipment of the first unit by the end of the year. All works are going on in accordance with our initial plans and the first unit will be taken online in 2023," he added.

The massive construction project in the Mediterranean province of Mersin's Gülpınar district supports the local and national economies, Romanets said.

"Currently, 11,000 people work on our site round the clock. Some 8,000 of them are employed as construction workers. They carry out the concrete and floor works. Some 80 percent of the workers are Turkish. They do the construction works. Russian employees do the works with the special equipment," he added.

Romanets and his colleagues gained experience in a very similar nuclear power plant construction in Belarus before arriving in Mersin for the $20 billion projects in 2015.

Akkuyu NPP's design was copied from the Novovoronezh NPP in Russia, but the technology and safety measures were further developed after the Fukushima nuclear disaster caused by an earthquake and a tsunami in Japan in 2011.

When completed, the plant will produce 35 billion kilowatt-hours of electricity annually to meet around 10 percent of Turkey's power consumption.