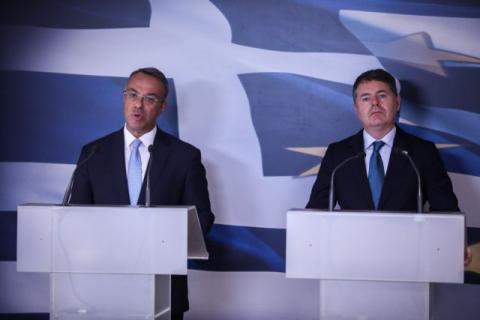 Greek FinMin Christos Staikouras more-or-less echoed European and international forecasts for economic growth in the country this year, pointing to a 3.6-percent hike in GDP, speaking after his meeting with visiting Eurogroup president Paschal Donohoe.

The Greek minister said his government continues to emphasize a "strong reform and growth" policy in the face of the pandemic and its repercussions.

Both leaders agreed that Greece posted amongst the most resilient performances by EU countries in dealing with unemployment amid the public health crisis, with recession hovering lower than what forecasts initially projected.

Both sides also said the Greek economy's competitiveness is improving, tourist arrivals are more than double than last year, bank deposits are rising and the cost of sovereign borrowing is now constantly negative, with spreads on Greek bonds also shrinking.

PM Mitsotakis in NY: Greece 2.0 plan is made by Greeks for Greeks