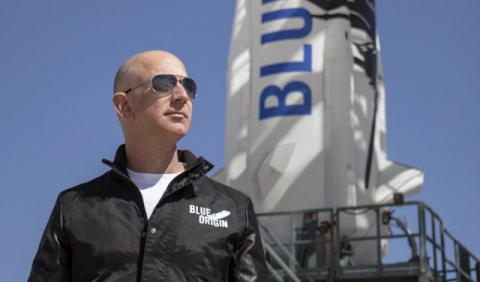 The US Government denied a protest by Jeff Bezos' private space company, Blue Origin against NASA's decision to award Elon Musk's SpaceX a 2.9-billion-dollar contract to take the next two US astronauts to the moon.

In April, NASA awarded the contract, part of a programme aiming to return astronauts to the moon by 2024, to SpaceX over Blue Origin and Dynetics.

NASA was expected to choose two of the three companies to build in competition lunar landing modules, making its selection of SpaceX as the sole winner a surprise. Blue Origin and Dynetics protested the decision.

"In denying the protests, GAO first concluded that NASA did not violate procurement law or regulation when it decided to make only one award," GAO managing associate general counsel Kenneth Patton wrote in a statement.

The statement said the office concluded that "the evaluation of all three proposals was reasonable, and consistent with applicable procurement law, regulation, and the announcement's terms."

NASA said in a statement that the decision will allow the space agency and SpaceX to "establish a timeline for the first crewed landing on the Moon in more than 50 years."

NASA's Artemis programme aims to return astronauts to the moon by 2024 as a stepping stone to the first human mission to Mars.

The NASA mission will see four astronauts launched on its Orion spacecraft into lunar orbit, where two of them - at least one a woman - will transfer to the SpaceX human landing system for their final journey to the moon.