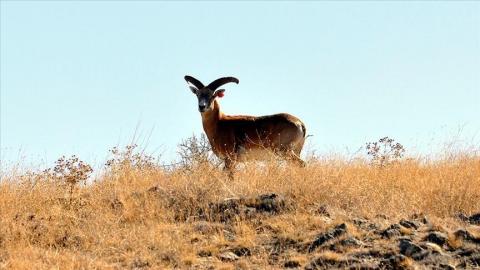 The number of the endangered Anatolian mountain sheep has surpassed 1,000 from 30 thanks to the timely efforts ongoing for nearly a half-century, an expert has said in a ceremony where the young animals were released to nature.
"In the 1960s, there were only 30 Anatolian mountain sheep, but the country raised these animals in five special zones," İsmail Üzmez, the head of the General Directorate of Nature Conservation and National Parks, told the state-run Anadolu Agency on Oct. 11.
Thanking the previous efforts of the authorities carried out in time, Üzmez listed the number of endangered animals in these five zones.
"We have 700 sheep in [the Central Anatolian province of] Konya, around 150 in [the neighboring province of] Karaman, 40 in [the Mediterranean province of] Kahramanmaraş and 100 in [the Aegean province of] Afyon," he said.
Speaking in a ceremony in the Central Anatolian province of Kırşehir where young Anatolian mountain sheep were unleashed to nature, Üzmez noted, "We also have 28 animals here in Kırşehir."
The expert highlighted that officials have started monitoring the animals' living habits and reproducing process after being released to nature.
The work on the Anatolian mountain sheep is part of a project called "Noah's Ark," which lists animals and plants across the country.
"We have a database of all living things in all 81 provinces. We know where the endangered plants or animals are, and we monitor them all," Üzmez added.