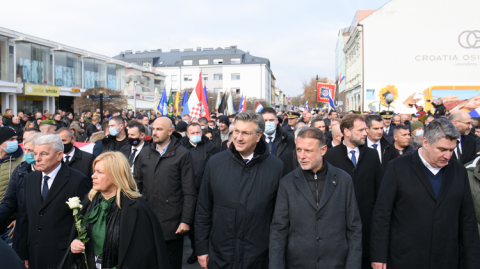 Police said that tens of thousands of people participated in the 'column of remembrance' procession through Vukovar on Thursday, marking the anniversary of the fall of the eastern Croatian town on November 18, 1991.

"Today, on the 30th anniversary Day of Remembrance, we recall all the heroes to whom the Croatian people owe their freedom, democracy and the life that we have after the [1991-95] Homeland War," President Andrej Plenkovic said in Vukovar before the procession started, Croatian news agency HINA reported.

"Vukovar is Croatia and Croatia is Vukovar. This can be seen today with numerous people arriving here from all over Croatia and from abroad to pay their respects," Plenkovic added.

The procession through the streets of Vukovar included war veterans' organisations and victims' families as well as state officials. Due to measures to curb the spread of the coronavirus, the procession was divided in groups of 25 people.

"Thirty years have gone by, but the memories are still alive. Croats will most definitely remember Vukovar forever," said parliament speaker Gordan Jandrokovic.

"I agree that there are divisions and me coming here today is a step towards overcoming those divisions… We will always be ready to take the extra step, to overcome divisions, so that both Croatians and Serbs live better," Milosevic told N1 TV.

Plenkovic expressed pleasure that Milosevic attended, saying that "the fact that the deputy prime minister is here is a clear signal of respect being shown towards the victims and war veterans".

On Tuesday, Milorad Pupovac, the head of the Serbian National...