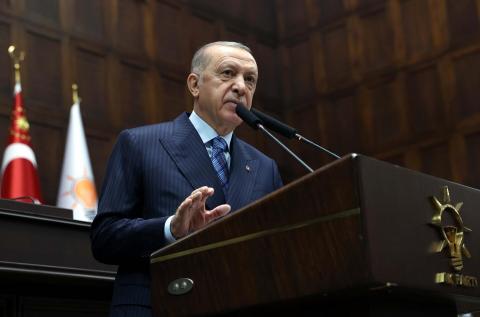 The new economic model that Turkey is pursuing aims to grow the national economy by boosting investment, employment, production and export, President Recep Tayyip Erdoğan has said, reiterating that this strategy will likely record more than 10 percent growth by the end of this year.

"Differently from many developing countries, Turkey has abandoned high-interest monetary policies that prevent the country's development. Instead, we are shifting to a growth strategy based on investment, employment and production," President Erdoğan said in a weekly address to his lawmakers at the parliament on Dec. 1.

This new model allowed Turkey to mark the highest annual growth rate among the G20 countries, Erdoğan stressed, repeating that Turkey is expected to reach double-digit growth in 2021.

"Thanks to this change that our country, which was the most important manufacturing hub between China and Europe during the pandemic, became almost the only country in the world that continued to grow," he stated. Turkey marked 7.4 percent growth in the third quarter of this year, becoming the highest growing country among the G20.

This change in economic policies has not been made overnight but is a result of the preparations since his Justice and Development Party (AKP) came to power in 2002, he suggested.

Risky but true for Turkey

This new economic model is perhaps politically risky but is the best for Turkey, Erdoğan stated, stressing that nobody can challenge the fact that low-interest rates will increase production and employment. "Can they say 'you are doing wrong'? No, they can't."