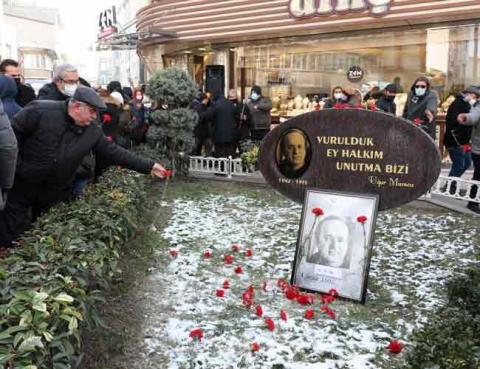 A commemoration ceremony was held for the journalist Uğur Mumcu on Jan. 24 to mark the 29th anniversary of his death in a bomb attack, with questions still remaining as to who was responsible for his death.

Despite the cold weather, hundreds of people including politicians, journalists and Mumcu's readers joined the late Mumcu's wife, former Deputy Parliament Speaker Güldal Mumcu, and the family members outside the family's home in Ankara where the journalist perished in an explosion caused by a bomb planted in his car Jan. 24, 1993.

The crowd laid flowers to the memorial and lit candles in the street before with placards reading "We will not forget." The memorial also featured a minute's silence in memory of the journalist.

Speaking at the ceremony, Republican People's Party (CHP) leader Kemal Kılıçdaroğlu underlined the importance of media and journalists for an enlightened nation. "Nobody should forget Uğur Mumcu. He was such a brave journalist in pursuit of truth," Kılıçdaroğlu said in his brief statement.

Known for his investigations on fundamentalism, corruption and terrorism, as well as his many books and articles, Mumcu was assassinated by a bomb placed under his car in Ankara in 1993.

The case into his death remains unsolved.

Meanwhile, on the 21st anniversary of his assassination, former Diyarbakır Chief of Police Gaffar Okkan was commemorated both in his hometown Sakarya and in Diyarbakır. City officials as well as students from the police academy in Diyarbakır joined the ceremonies.