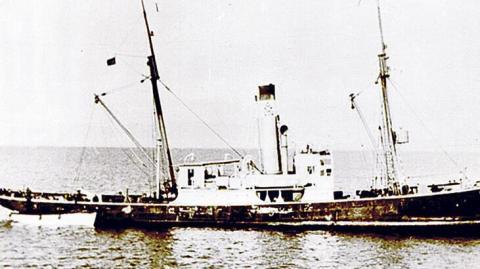 A book has been published on the history of a tugboat that witnessed the only naval battle of the Turkish War of Independence, a series of military campaigns that was waged after parts of the Ottoman Empire were occupied and partitioned following its defeat in World War I.

The book, titled the "Alemdar Ferry Incident on its 100th Anniversary" and prepared for publication by academic Evrim Şencan Gürtunca from Başkent University with documents obtained from the diplomatic archives in Turkey and France, features interesting details about the period.

In 1921, Alemdar, with a crew of seven, sailed to the Black Sea to join the Turkish nationalists under the pretext of a salvage operation. However, the Allies' high commander gave strict orders to arrest the crew and bring the ship back.

Within the scope of this order, the French navy teams in the region landed on the Turkish ship and caused a short-term conflict on the deck. However, this operation led to the detention of the French sailors.

According to an agreement reached on March 2, the French military personnel who were held captive were released and the French navy promised not to interfere with Alemdar's voyage.

Despite it being a relatively small clash, the first naval victory against the Allies and the news of arresting an allied commander boosted the morale of the Turkish side.