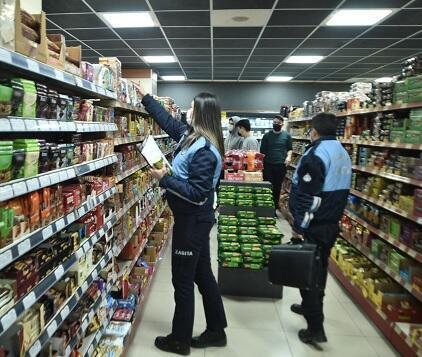 Officials have begun checking supermarkets to see if they reduced the prices after the government cut the value-added tax (VAT) on food products, while President Recep Tayyip Erdoğan has said those who do not comply will face penalties.

Last week, Erdoğan announced a government decision to lower the VAT on basic food items from 8 percent to 1 percent. The new tax rate took effect as of Feb. 14.

"The trade minister as well as the treasury and finance minister made necessary statements on this. Inspections teams are in the field. Those who run counter to the steps we have taken will face severe penalties," Erdoğan said on Feb. 14 before his departure to the United Arab Emirates for an official visit.

Units from municipalities' police forces began checks across the country at supermarkets to see whether price tags on the shelves and sales slips feature the new rate.

Meanwhile, large supermarket chains announced that they adjusted their prices in line with the new VAT cut.

They said the prices of thousands of items were changed.

"We are checking the price tags on the shelves and collecting sample products. We take those items to the cashier to see if there is a difference between the price charged and the price displayed on the tags on the shelves," said Halil İbrahim Çırak, a municipal police officer in Istanbul's Bahçelievler district, while explaining the inspections they conduct.

"We are simply looking at if businesses are complying with the VAT cut. If there is a violation, we take the necessary legal action."