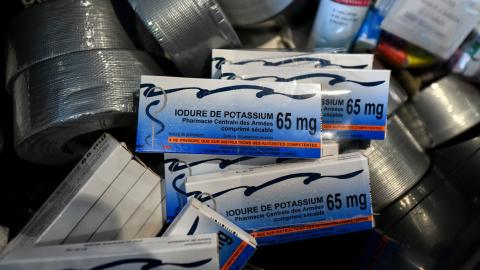 Romania's Health Ministry has delayed the mass distribution of iodine pills to the population until mid-April, after many family doctors said they would refuse to distribute them.

Fear of a nuclear accident in war-torn neighbouring Ukraine prompted calls for the mass distribution of Iodine tablets that can block absorption of cancer-causing radioactive material and so reduce the risk of cancer.

On Monday, authorities launched an informative campaign on how citizens can take the pills in the event of such an attack.

"At the beginning of this week, the government and the Health Ministry will start a campaign to inform the population on administering and storing potassium iodide tablets," Health Minister Alexandru Rafila said.

The Ministry has stockpiled 30 million iodine pills to distribute to the population, to be taken in event of a nearby nuclear accident. They were produced in Romania, in the eastern town of Iasi.

Romanians emptied iodine pharmacies a month ago after Russia first attacked Ukraine when many feared a possible nuclear accident at Ukraine's Chernobyl plant.

But many doctors have refused to distribute the tablets, complaining that their offices are still busy dealing with cases of COVID-19, as well as flu and respiratory illnesses.

Many doctors said they also fear that the authorities will communicate the campaign about iodine poorly, as they often did during the COVID-19 pandemic.

The ministry has not explained what the info campaign will say precisely. But it has stressed that "there is no danger [right now] that would make it necessary to administer these pills".

Both doctors and the Health Ministry stress that iodine should not be administered preventively but only in the event of a...

Biden thanks Erdoğan, US signals support for Turkish F-16s