Purple jellyfish: Surge in the Ionian – Where they have been found 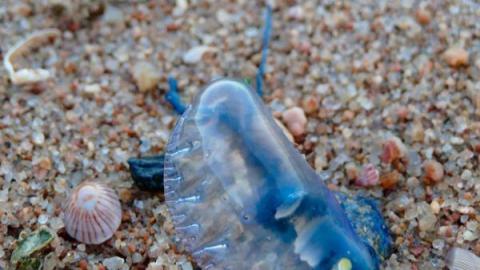 Where they have been located
According to the Observatory, purple jellyfish have already been recorded in Zakynthos, Paxos, Antipaxos, Cephalonia, Amvrakikos gulf and Corfu.

It is worth noting that experts report that in the coming days the problem will begin to intensify especially in the Ionian.

One of the most dangerous species of jellyfish

The purple jellyfish (Pelagia noctiluca) is considered one of the most dangerous species of jellyfish in the Mediterranean.

Its sting is painful because of the neurotoxin released.

It is recognizable by its four main and eight longer and thinner tentacles, along with a dotted "hat" and purple interior, while it has a usual diameter of 6-10 cm.

When it is young its color is orange-brown and when it grows up it takes on this intense mauve-purple color.

The purple jellyfish is found at depths from 0 to 1600 meters. It feeds mainly on sea breams, various shellfish, plankton crustaceans and fish eggs.

The largest natural predators of the jellyfish are the Skin Turtle, the Caretta Caretta, the Tuna, the Swordfish and the Moonfish.

Purple jellyfish all over the Mediterranean

According to the observatory, the problem of the spread of the outbreak of purple jellyfish (Pelagia noctiluca) is not only in the Ionian. Last summer we had a boom in the Aegean, Spain and France.