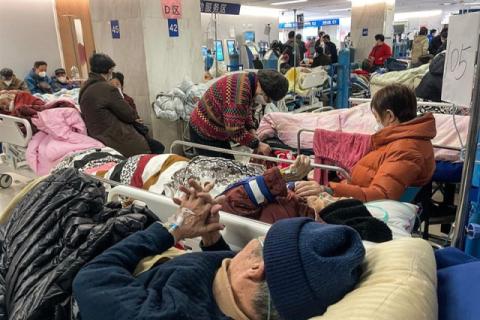 The chief doctor at one of Shanghai's top hospitals said 70 percent of the metropolis's population was infected with COVID-19 during China's massive surge in cases, Chinese media reported.

The sharp rise in the number of infections came after strict restrictions were suddenly eased last month without warning or preparation and quickly overwhelmed hospitals and crematoriums.

Chen Erzhen, vice president of Ruijin Hospital and a member of Shanghai's COVID Expert Advisory Group, estimated that most of the city's 25 million residents may be infected.

"Now the spread of the epidemic in Shanghai is very wide and has reached 70% of the population, which is 20 to 30 times more than (in April and May)," he told Dajiangdong Studio.

Shanghai has endured a grueling two-month lockdown since April, during which more than 600,000 residents were infected and many were taken to mass quarantine centers. Now, however, the Omicron variant is spreading unchecked throughout the city, and experts predict that infections there will peak in early 2023.

In other major cities, including Beijing, Tianjin, Chongqing and Guangzhou, Chinese health officials suggest the wave has already peaked.

Chen added that his hospital in Shanghai sees 1,600 emergency patients daily - double the number before restrictions were lifted - with 80% of them being COVID patients.

"More than 100 ambulances arrive at the hospital every day," he was quoted as saying, adding that around half of emergency admissions were for vulnerable people over the age of 65.

Chinese authorities are bracing for a virus wave that will hit China's under-resourced rural areas as millions prepare to travel to their hometowns for the week-long Lunar New Year holiday...

Greek cargo ship that ran aground in the Suez Canal refloated

90% of people in China province infected with Covid: official