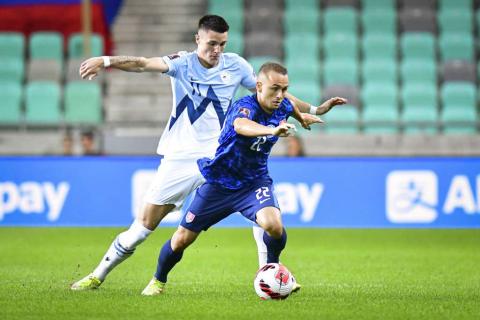 Benjamin Šeško, who plays for the Austrian side Red Bull Salzburg and is considered one of the European strikers to watch out for, has won Slovenia’s player of the year award. The 19-year-old also took home the award for best young player.

Both awards are given out by the sports magazine Ekipa SN and the winners are picked in cooperation with sports journalists from other Slovenian media outlets.

To win the country’s 15th player of the year award, Šeško beat six-time winner Jan Oblak, one of the best goalkeepers in the world, who plays for Atlético Madrid and is the captain of the Slovenian men’s national team.

Last year, following speculations that he had been eyed by a number of top-ranking clubs, such as Milan, Newcastle United and Manchester United, it was announced that Šeško is joining Germany’s Leipzig in the summer of 2023.

The German Bundesliga club has signed him on a five-year contract for a reported transfer fee of some €24 million in what is the greatest sum ever paid for a Slovenian player.

Making his debut for the national team in June 2021, Šeško became its youngest ever player. Scoring his first goal for the team just a few months later, he also made history as the country’s youngest ever scorer.

This is his first player of the year award and his second best young player award.

The best coach award was won by Ante Šimundža for the second time in a row, with Matjaž Kek, the national team’s head coach coming in as second. Šimundža currently coaches the Bulgarian First League club Ludogorets Razgrad that won their eleventh consecutive title in the past season.

Timi Max Elšnik, who plays as a central midfielder for Olimpija Ljubljana, has been voted the best player in the Slovenian top-tier league.

And in what was the first such vote, the best women’s player award went to Lara Prašnikar, a striker playing for Eintracht Frankfurt in the German Frauen Bundesliga and a member of the Slovenian national team.