Romania's leftist Prime Minister Victor Ponta is likely to win the presidential elections on November 2, according to a recent survey.

Prime Minister Victor Ponta in Targu-Jiu on Wednesday said that he was positive after December 21 the provisions of the Criminal Code would be enforced in the case of the deeds committed by President Traian Basescu.

Listed Grivalia Properties, formerly known as Eurobank Properties, intends to invest 500 million euros in the local real estate market over the next three years, company officials said on Wednesday during the presentation of its new brand name.

Prime Minister Victor Ponta said in this city north-west of Bucharest on Wednesday that President Traian Basescu, in an attempt to deal him an electoral blow by his allegations that he - Ponta - was an undercover Foreign Intelligence Service officer, in fact attacked the judiciary and the intelligence services.

The Romanian authorities intend to organize in 2015, at northern Bucharest Romexpo exhibition centre a show of the Romanian companies called 'Fabricat in Romania' or 'Produs in Romania' (manufactured or made in Romania), on Wednesday announced the Economy minister, Constantin Nita at the opening of the Bucharest International Technical Fair - TIB.

Liberal head Klaus Iohannis, running for president of Romania in Nov. 2 elections said on Wednesday that incumbent President Traian Basescu stirs a 'buzz' to divert attention from the electoral campaign and added the head of state and Prime Minister Victor Ponta, also a presidential hopeful are 'uselessly wrangling' and the candidates do not succeed speaking of their programmes.

Romanian Foreign Minister Titus Corlatean, at a meeting with visiting Deputy Secretary-General of the Organisation for Economic Co-operation and Development (OECD), William Danvers on Wednesday voiced Romania's interest in joining the organisation, as he said this is a major objective of the Romanian foreign policy, the foreign affairs ministry said in a release to AGERPRES.

Premier Victor Ponta said on Wednesday that Romania has made efforts to meet a set of high standards, regarding primarily competitiveness and transparency, and that the Government plans to seek for Romania full membership of the Organisation for Economic Co-operation and Development (OECD).

Victor Ponta's centre-left government in Romania says it has enough funds to raise pensions by 5 per cent rise, starting in January.

BELGRADE - Serbian Interior Minister Nebojsa Stefanovic and his Romanian counterpart Gabriel Oprea stated on Tuesday that strengthening of bilateral cooperation is one of the two countries' priorities.

BELGRADE - Officials of European countries' central banks met at the National Bank of Serbia (NBS) on Tuesday for a three-day forum on information and communication technology in central banks, the NBS has stated.

The meeting, the largest of its kind in Europe, was opened by NBS Vice-Governor Ana Gligorijevic and head of the IT Sector goran Kunjadic.

The presidential candidate of the People's Movement Party (PMP), Elena Udrea on Tuesday requested Victor Ponta to withdraw from the presidential race and resign as prime minister, following President Basescu's statement according to which Ponta was an undercover officer of the Foreign Intelligence Service (SIE) between 1997 and 2001. 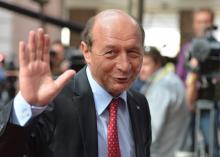 Romania's President Traian Basescu accused Prime Minister Victor Ponta of working for the the country's secret services between 1997 and 2001.

"Victor Ponta has to acknowledge that he was an undercover employee of the Romanian secret service between 1997 and 2001," Basescu urged on Tuesday the head of state as quoted by the website Dnevnik.bg.

Prime Minister Victor Ponta declared that Romania is a NATO member state, wishing to play a balancing role in the region, and as such it cannot accept threats.

The temperature of Romania's Presidential election moved up a notch on Monday night after the incumbent head of state, Traian Basescu, dramatically accused the Prime Minister, Victor Ponta, of having worked an undercover intelligence agent.