In the northwestern province of Çanakkale, 11 artists from different disciplines have come together to create magnificent sculptures belonging to Greek mythology in their workshop in Küçük Sanayi Sitesi (Small Industrial Site) that will be exhibited in South Korea's giant aquarium. 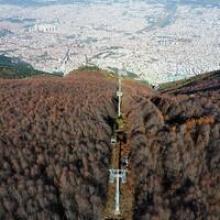 People enjoy autumn colors with tones of yellow, red, and brown of Uludağ Mountain, one of the most significant winter tourism destination in Turkey's Bursa province. (Source: AA)

A 1,800-year-old sewer system was discovered during archaeological excavations in Amida Mound, described as
"heart of the old city", in the historical Sur district in southeastern Turkey.

Excavations in the Amida Mound, which hosted many civilizations, including Urartians, Persians, Romans, Umayyads, Abbasids, Seljuks, Artuqids and Ottomans, were concluded this year.

The expected opening of the new building of the Presidential Symphony Orchestra (CSO), which aims to be one of the leading music centers in the world, is a few days away.

The foundation of the building was laid 23 years ago in 1826 and has been under construction for years. It will open its doors to art lovers with a magnificent concert to be held on Dec. 3.