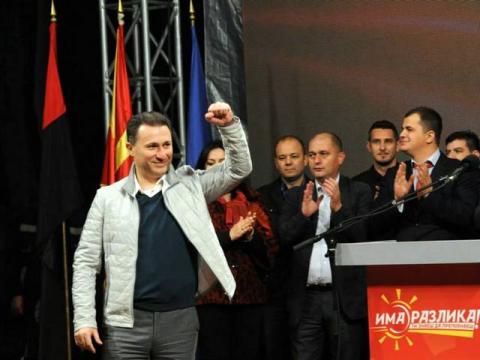 The sale was transacted “through four off-shore and two local companies that were in possession of 51 per cent of the bank’s shares and were under Gruevski’s control”, the SDSM head, Zoran Zaev, claimed on Wednesday.

In January 2004, Nini paid more than €900,000 to the companies' accounts and made an additional payment of €1.5 million directly to Gruevski, Zaev alleged.

Gruevski who became Prime Minister in 2006 after his VMRO DPMNE party won a general election denied the accusations and said he would file slander charges against Zaev.

Presenting documents of financial transactions as well as legal papers from Macedonia’s Central Bank that approved the sale of the bank’s shares, the SDSM said they contained clear evidence of wrongdoing.

“Within a period of four months, most of this money had been withdrawn in cash under Nikola Gruevski’s warrant, for which we also have evidence,” Zaev said.

Zaev said that apart from this sum, which according to the documents was approved by the then bank governor, Ljube Trpeski, Gruevski and Nini arranged for an additional sum of €1.5 million to be “paid illegally in cash directly to Gruevski”.

By combining the official and...