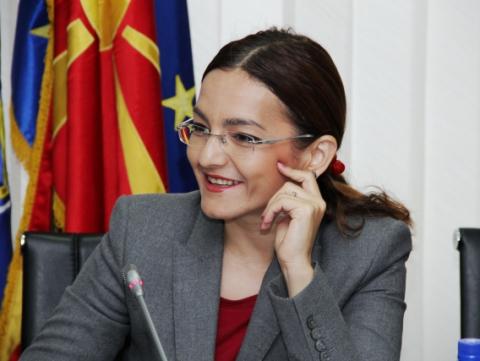 Interior Minister Jankulovska says hard-line Islamists returning to Europe after fighting in Syria pose a danger to the whole continent.

“Four Macedonian citizens already died in Syria, which is a strong indicator that this problem is expanding,” Jankulovska said.

“This is not a problem isolated in a single country but a problem threatening all of Europe,” she added.

The minister noted that two of the four citizens from Macedonia who died fighting in Syria's civil war were recruited in Western Europe.

The International Center for the Study of Radicalization, ISRA, a think tank based in King's College, London, believes some 130 fighters from Europe, mostly ethnic Albanians, have joined groups linked to al-Qaeda in Syria, including Jabhat al-Nusra and the Islamic State of Iraq and al-Sham, or ISIS.

Jankulovska said the Macedonian government did not have a clear view of the exact number of its citizens fighting in Syria, but added that new amendments to the criminal code could serve as a deterrent to others joining them.

“We have introduced a new crime concerning people who are mediating and promoting the idea of going to Syria,” Jankulovska said.

“We believe this send a strong message from the government that we do not support this kind of behaviour and want to anything possible to stop Macedonian citizens from going to Syria,” she concluded.