Who is the top model who wants to kill Angela Merkel – Not? (photos) 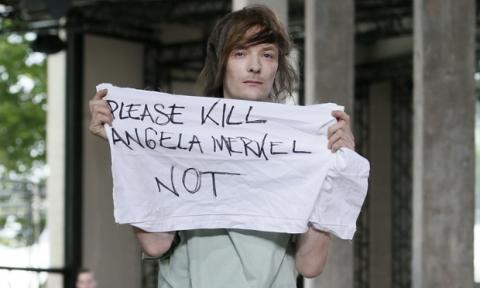 Fashion designer Rick Owens has in the past refered to German model Jera as his muse, but his muse upstaged all his designs on the runway this week despite the fact that designs were edgy with snout-like helmets and radical cloth. Jera made his way down the runway at the Palais de Tokyo, sauntering in a greenish draped top and oversized black shorts when he pulled out a piece of white cloth from beneath his tunic. He then turned to editors and buyers in the front row to unfurl a hand-written banner that read: “Please Kill Angela Merkel – Not.”

Social media buzzed trying to understand what the message wanted to convey. Was it in favor or against the German chancellor?

The model was whisked away, not given a chance to explain the purpose of the statement that sent a buzz through social media. “This was an independent statement and does not reflect the opinion of the house of Rick Owens,” was the statement issued by a public relations firm representing the fashion house. The young model was immediately told to leave upon returning from the stage and did not appear for the finale.

Speaking backstage, Owens told Women’s Wear Daily: “It’s a crazy, rogue model that I punched when he came back out. Please say that I punched him.” Later, the fashion designer had second thoughts. “Afterwards I thought, ‘I kind of created this.’ Maybe I’ve created an environment where provocation is endorsed or maybe even encouraged. Maybe he saw it as ‘In Rick’s world,anything goes.'”

“He is a kook and I love a kook,” said Owens, who said that he wondered if Jera is his own Valerie Solanas, the crazed hanger-on who shot Andy Warhol.

The model and designer have worked together for a decade. Just a few months ago, Owens photographed Jera nude with a live horse for the magazine Neue Journal. Jera had been picked off the streets of Cologne, Germany, by Eva Godel, owner of Tomorrow Is Another Day modeling agency. He works for special bookings for Owens. “He’ll never work again,” said Godel. “He’s out of the agency.” She declined to give his full name or make him available for comment. “I always said that I can not take any responsibility for Jera if they would like to book him, because he is crazy and unreliable.”