SYRIZA celebrates its victory with smiles and whiskey! (pics) 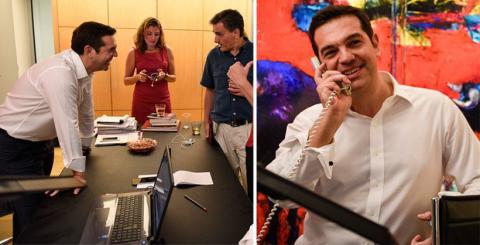 There was enthusiasm at SYRIZA’s headquarters on Koumoundourou street from the first exit polls that put the party ahead of its main rival, the conservative New Democracy party. As the night progressed with votes tallied in the party’s favor, reserved joy gave way to smiles and cheers… and the flow of whiskey.

Tables with two TV sets were set up across the road from the party’s central offices. Shortly before 7 p.m., SYRIZA’s spokesperson Olga Gerovasili and heavyweights like Ioannas Balafas, Nikos Filis and Dimitris Vitsas were at the Koumoundourou street headquarters awaiting results. The man of the moment, Alexis Tsipras, made his entrance at 8.15 p.m. with Betty Batziana, his partner, by his side. There were cheers as the party leader arrived.

A great deal of discussion at SYRIZA circles focused on the poor results of the Popular Unity party made of SYRIZA dissidents. Headed by Panagiotis Lafazanis from SYRIZA’s Left Platform, a few voices felt relief that Tsipras would not have to contend with him following the elections bearing in mind that the party did not gather the required 3% of votes to get into Greek Parliament.

At around 11 p.m., Tsipras headed to Klafthmonos Square where a huge tent of SYRIZA’s supporters were gathered. Following the acceptance speech, he returned to the party’s headquarters on Koumoundourou in the shielded BMW transporting him and his wife throughout the night. Shortly after midnight, Tsipras and his partner returned to their home in the suburb of Kypseli.